It starts with a vision

Realizing potential through harmony with nature, people and animals. 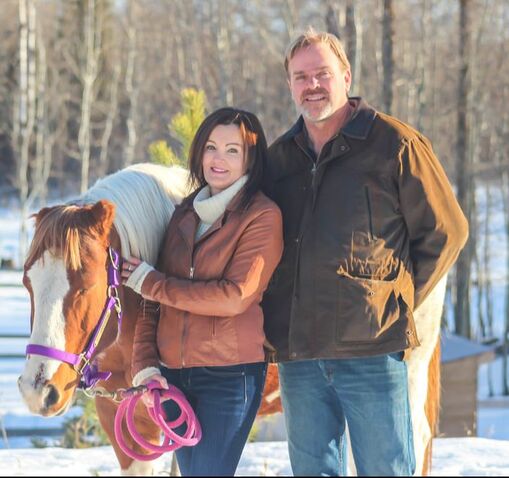 Photo by DC Photography
Eileen is the youngest of 11 children and grew up watching her mother tend to her older brother John, who had sustained a severe brain injury at eight months old because of meningitis being misdiagnosed as tonsillitis. John was able to reside at home until he was 11 with the help of his devoted parents and older siblings but due to hardship and “the times” John went to the children’s institute for his teenage years. He came home every weekend and special occasion but from that point forward, John’s life was complicated, and his family was forced to be strong advocates for him.
​Eileen’s vision of Dreamcatcher™ stemmed from this lived experience of helping others, specifically those who could not advocate for themselves and whom others did not seem to understand. Eileen and her husband Dale were born and raised in cities. When Dale started talking about moving to the country, having a bountiful garden, peacocks and land, Eileen could not fathom what that life might be like. She was not interested in living in the country but had always wanted a horse. At the time she was working in non-traditional therapeutic modalities as a behaviour management specialist in Grande Prairie with youth who had sustained brain injuries and were exhibiting dangerous behaviours. She began envisioning them standing next to a horse, fully immersed in nature and the unconditional love and acceptance that only animals can provide. She immediately began to research if such a therapy existed. It was scarce, but it was there.
Eileen and Dale set out to find the perfect place for this new dream of hers: buy an acreage, rescue animals, help people (and have a garden for Dale). After 6 months of searching, they found what is now the home to Dreamcatcher™ and there was no turning back. Dale didn’t waste time getting to work. He began clearing land and building fences for the animals that would eventually call Dreamcatcher™ their home; seeded and cared for new pastures; transformed an ensuite into a therapy room and used his Civil Engineer training to concoct a chick coop out of an old shed.
Meanwhile, Eileen worked tirelessly: learning about animals, training with horse professionals, Equine Facilitated Counselling professionals, training with experts in the field of Animal Assisted therapy to ensure a safe and ethical practice involving equines and many other animal species and of course marketing to anyone who would listen to her vision.
Over the years, Eileen has transformed a 40 acre treed property into a sustainable psychology practice, academy and tourism business, and a not for profit charity, which combined provide: mental health services to individuals and families; recreational services to the public; and education to businesses and professionals to the highest global standards in AAT. In 2012, Ardrossan Dreamcatcher Nature Assisted Therapy Association, the charity, was awarded The Duncan & Craig Laurel Staff Choice Award, recognizing innovation & creativity in not-for-profits, and in 2012 and 2013 received a certificate of nomination. In 2020, Dreamcatcher™ was honoured with a visit from Alberta's premier and in 2021, Eileen was the recipient of the Strathcona County Award of Excellence in Agricultural Leadership and recognized for her outstanding contributions and achievements in agricultural stewardship, innovation, and promotion. Eileen has been featured in many newspaper and television news segments and Dreamcatcher™ has been featured in magazines and mini documentaries both in video and audio publications.
It is because of Eileen’s vision and unwavering dedication to ensure everyone has an opportunity to find the help they need, with the assistance of her husband Dale and countless volunteers and staff, that Dreamcatcher™ emerged into what you see today.
​"Do not go where the path may lead; go instead where there is no path and ​leave a trail."
​Ralph Waldo Emerson